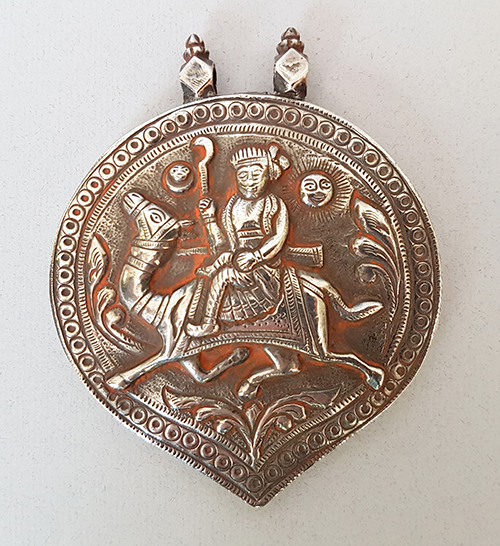 An Indian Ioni-shaped good quality silver amulet from Rajasthan. As the shape is indicative of the female genitalia the piece is related to fecundity. The total length is 9.5 cm, and the amulet is quite heavy.

We asked our FB friend Arpit Pansari to try and explain what is figured on the amulet. We thank him greatly for the information he supplied. He believes that the piece is from Rajasthan because the design of the amulet has the sun on its one side and the moon on the other side which represents symbols of the Suryavansha dynasty (sun) and the Chandra vansha dynasty (moon).

As commentator Chetan had mentioned, most deities in Rajasthan are either on horse or on a lion and normally there are no signs of a deity on a camel. Arpit believes that the image represents some Kuladevta or Family deity – maybe “Pabuji” who was a family deity of the Rabari tribe. The presence of red vermilion [usually associated with luck] on this amulet makes him believe strongly that it must be worshipped during special occasions for that family – such as marriages – to provide good vibes and luck. We think it is a lovely “rich” piece.