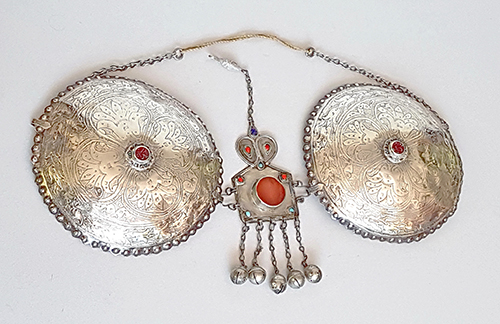 This remarkable and rather rare headpiece, called serajna, appears infrequently on the market, though it is well enough documented – notably but not uniquely – in Dieter and Reinhold Schletzer, Alter Silberschmuck der Turkmenen (1983), especially on p. 210 ff. It is made of silver (finely decorated), with carnelians (those on the discs are intaglios) and turquoises; and when worn it is attached to a large structure above the head, facing the onlooker. The diameter of each curved disc is as much as 18 cm, and the total width of the ornament is 44 cm. It comes from Carsanga, in the far east of Turkmenistan, close to both Afghanistan and Uzbekistan. We purchased it a number of years ago from an antiques dealer in Amsterdam who did not know what the object was.

Share this:
← Necklace and Bracelet from India
Headband from Papua New Guinea →