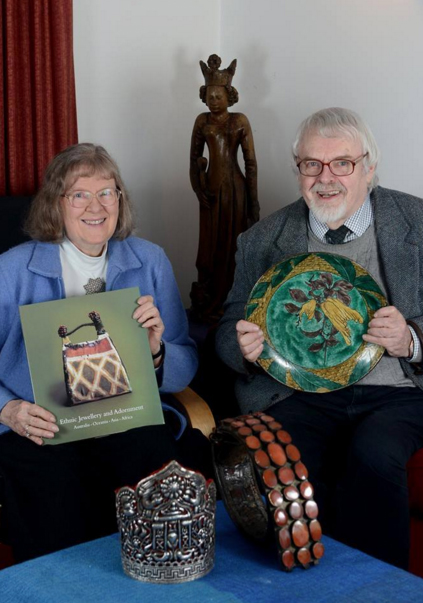 First I need to say something about history. This website offers material from the by now well-known large ethnic jewellery and adornment collection of Truus and Joost Daalder, from Adelaide, Australia. The Daalders have been collecting in this field since around 1980. In 2009, Truus Daalder published a large book on the collection including pieces collected until 2007. The book is called Ethnic Jewellery and Adornment

It was co-published by Truus’s own company Ethnic Art Press and Macmillan Art Publishing in Melbourne. Copies of the book can still – worldwide – be ordered at the time of writing (2016) directly from Truus at her website Ethnic Art Press. Within the US it can also be bought from Amazon

Truus Daalder grew up in the Dutch village of Bergen, which is known for the achievements of its painters. Already as a child she developed a keen interest in the visual arts and a passion for gaining an understanding of them. In 1966, she and her husband Joost – also from Bergen – who fully shares her devotion to arts, went to live in New Zealand, where the couple soon became serious collectors. Their experiences prompted Truus to write, in 1969, the bestseller Hunting Antiques in New Zealand

, which was enthusiastically acclaimed.

After moving to Adelaide, Australia, in 1976, the Daalders increasingly found themselves fascinated by art objects from non-European cultures, not least in the area of jewellery and adornment. Their enthusiasm and persistence led them to acquire an exceptionally impressive collection in this field. Truus’s determined effort to learn as much as she could about the objects they collected has extended over many years, both because of her intrinsic interest and to prepare herself for the writing of her scholarly but accessible book.

Right up to the present, the Daalders have continued to collect important and rare pieces of ethnic adornment, as well as lending them generously to museums. Objects from their collection were featured in the exhibit, “A Fine Possession,” at the Sydney Powerhouse Museum, which lasted from September 24, 2014 to May 22, 2016. The Daalders had already exhibited for the National Trust in Adelaide in the early 90s, and recently have also lent important pieces of jewellery to the National Gallery of Australia, the Art Gallery of South Australia, and the Samstag Museum in Adelaide. As well, they generally and regularly show examples from their collection on Facebook, notably on the page Ethnic Jewellery and Adornment, and Truus also is a popular speaker to various interested audiences.

First of all we should like to express our sincere thanks to Barbara Steinberg for her site concept, design, and all her work as administrator of this website, and to Sean Vivide for all the technical assistance he has provided to set it up.

We, Truus and Joost Daalder, have seriously collected in the field of ethnic jewellery and adornment since 1980. By the early years of this century the collection had grown to such an extent that we decided to put together a book on it, supplemented with objects generously made available for inclusion by the South Australian Museum in Adelaide, which has outstanding holdings in the areas of Australian Aboriginal and Oceanic adornment. The curators active in these areas also provided much assistance. Truus spent several years researching all objects that were included (more than 700) and writing extensively and thoroughly about them, aiming for a combination of sound scholarship and readability. Our son Jeremy Daalder, as a professional, took the photos which have been so much admired and loved. Joost edited the book. The book has been very well received by a great variety of people worldwide.

The preparatory work was completed by the end of 2007, and the book was published in collaboration with Macmillan Art Publishing in 2009. As Barbara mentions above, copies are still available for purchase (worldwide) at Ethnic Art Press (directly from Truus), or, in the United States, from Amazon

Finishing work on the book in 2007 did not bring our collecting to an end. On the contrary, we have continued to collect until now (August 2016). However, we have recently decided not to continue collecting ethnic jewellery, given the variety of objects we own, and our advancing age. This is therefore an appropriate time to publish on this website all those objects which we have collected from 2007 and which are not included in Truus’s book. Our idea is that people interested in our collection will own, or at least will have access to, Truus’s book, but will also want to see the objects which we have collected since the time that preparatory work on the book ceased in 2007.

We hope that what we are offering on this website will be of interest and enjoyment to many, and the site can be accessed without cost. We have done our best to provide adequate information on the objects shown, but we should be grateful for well founded, scholarly contributions that may add further to knowledge. The subject of ethnic jewellery is a very complex one, and new information is constantly coming to light, particularly as a result of interchange on the internet. We should gladly publish worthwhile comments which increase knowledge and would publish them with appropriate acknowledgement. Comments can be submitted to Barbara Steinberg or to Joost Daalder.